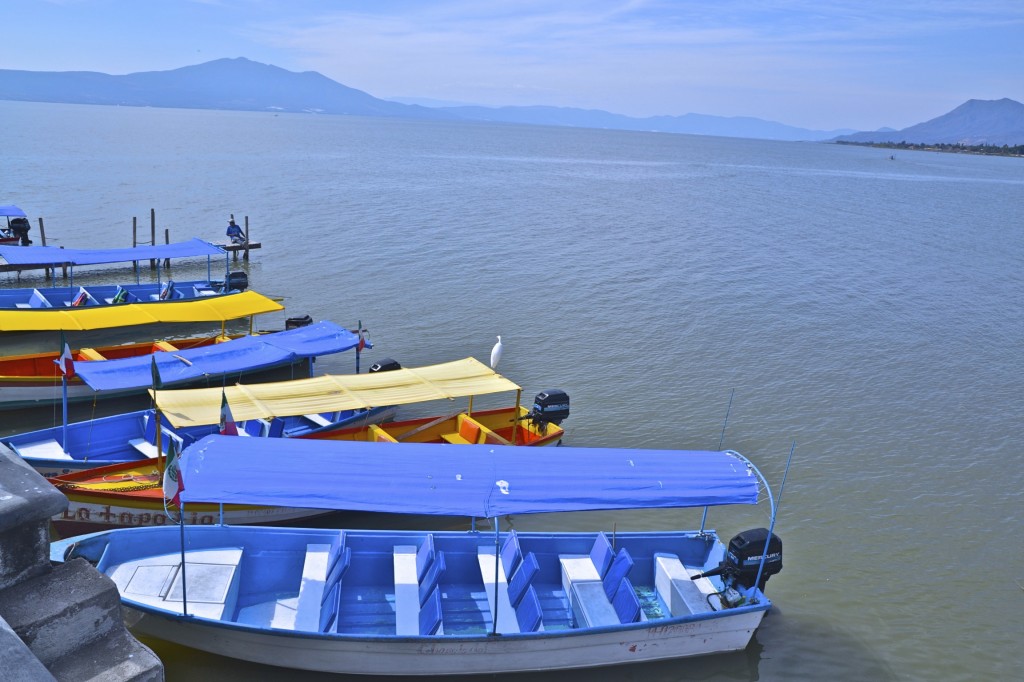 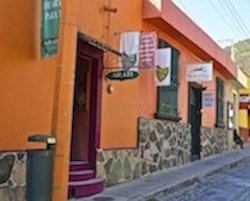 I’d booked our tickets before we found out about the murders.  This was our one chance to get away for a few days after a hectic few months.  Our destination was Ajijic, Mexico, a small lakeside resort noted for its warm weather, cobblestone streets, art scene, and restaurants.

Who knew that only six months ago narco gangs had massacred 18 young locals and strewn their dismembered remains along the town’s hills and roads. The quiet enclave of 15,000, normally sheltered from drug violence, was terrorized for weeks.

Eventually, things eventually settled down but there was a new awareness that the old way of life had suffered a terrible blow. When we learned that the struggle was mainly among narco gangs over drug routes and feeling somewhat reassured by the presence of many retired Americans in Ajijic, we decided to go anyway dreaming of rest. 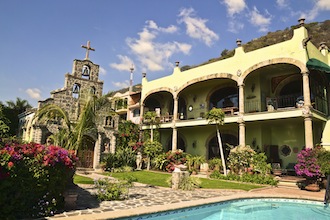 Mexico has always been a country of many contrasts and contradictions. Driving from the Guadalajara airport to our bed and breakfast, we passed pockets of shanty towns adjoining neighborhoods of luxurious homes and modern shops.  These two realities coexist as a matter of routine all over the country.

Mexico’s hidden treasures are often found behind high walls and that was certainly true with us. Walking through the gates of our B&B , we stepped into a paradise. Lush terraced gardens, winding paths hugged by flowering purple and pink, bubbling fountains, Roman sculptures, Spanish 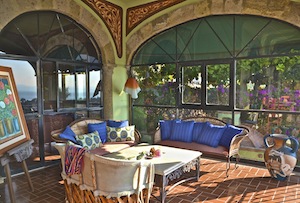 columns and arches, rooms painted burgundy and gold, all enveloped our senses like a sensuous embrace. Our B&B was really a European style villa of breathtaking beauty!

Its name was “Villa del Angel” and from the cushion-filled patios, we admired its sculptured landscape, turquoise pool, stately grey stone chapel with its three bells and a cross, and the most spectacular view of Lake Chapala, Mexico’s largest freshwater lake, 50 miles long and 15 across.

Our suite was the highest room on the property.  To reach it, we climbed a staircase frothing with fuschia bougainvillea.  Our room was a spacious terra cotta suite with a fireplace, beamed ceilings, sitting area, and a balcony boasting a panoramic view of both the town and the lake. We were in Heaven! 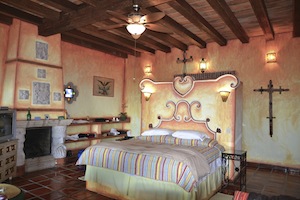 “You can stay in any of the other rooms if you prefer,” the owner told us.  “You’re the only guests.”

“Why are we the only guests?” I asked. “It’s gorgeous here!”

As we would soon find out, that was only part of the story.

We enjoyed a scrumptious dinner of tamarind chicken at one of the town’s 20 restaurants, and having been warned not to walk the streets at night, we had a taxi drop us off at the villa’s back entrance, so the cabbie didn’t have to attempt the killer cobblestoned hill to the front gate.  Unfortunately, by now it was dark and our keys wouldn’t open the lock.  However, before we could protest, our driver had scrambled over the wall, opened the gate from the other side and then driven away! 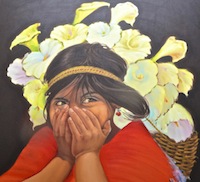 We began the slow climb up the villa’s lower garden.  We were unfamiliar with this part of the property and  looked for recognizable landmarks as we progressed.  Strangely, none were to be found.  In fact, this property didn’t look like the villa, at all!   The truth suddenly hit us:  we were on the wrong property!

“Great!  Breaking and entering– on our vacation!” I exclaimed.

Scrambling like two teenagers to escape before the owners, dogs, guards…police– or all four– discovered us, we found ourselves exactly where we shouldn’t have been:  stranded alone in a dark back alley at night. Welcome to Ajijic! 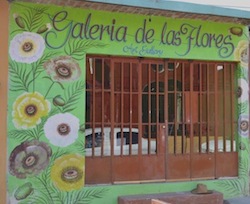 I’d spent many happy years in Mexico as a youngster, but times had changed, so I no longer felt as safe, especially in a town I did not know.  Fortunately, my Spanish was still good, so we walked up the road and I asked a couple nuzzling in a doorway if they knew where our street was.  The young man pointed, but it led us to a dead end.

We walked in the opposite direction till reaching a wider street with more light.  Not having anticipated the evening’s excursion, my  high heeled boots slipped and slid over the cobbled stones with every step.  Finding a small shop still open, I asked the young girl inside if she’d call us a taxi.  Learning that we were only blocks away from the villa, we decided it would be faster to walk, so she pointed the way. 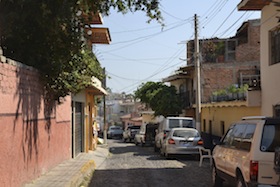 The trek involved a steep climb up several long cobblestoned blocks.   It was not a great part of town and as we walked, stragglers and street kids stared at the gringo couple so obviously out of place.

Moving briskly. we suddenly encountered a gang of eight guys lurking on a corner.  They all turned to study us. “Don’t make eye contact,” I advised my husband. Suddenly, a dull yellow 1960s Oldsmobile crept up slowly behind us, then came alongside while the driver checked us out.  “Just keep going,” whispered my husband.  We ignored him and kept walking.  Finally, the car swerved in front of us cutting us off.  Showing no fear, my husband and I kept moving forward, him to the left and I to the right. 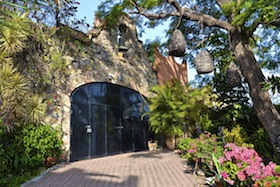 The killer hill, our last stretch, now lay ahead.  As we began the climb, and our pace considerably slowed.  If anyone had wanted to nab us, we were easy pickins at that point.  We prayed for safety every step we took, feeling we were being watched the whole time.

Breathing hard and thigh muscles stinging, we finally made it the top of our hill. Oh, happy sight!  There was the Villa gate– and the key fit!  We’d made it home! 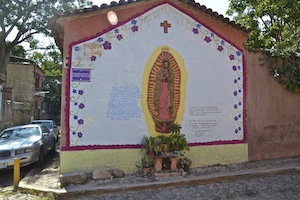 “What is that!” I exclaimed bolting up.  “Explosives,” groaned my husband.

Next, a loud brass band began its “bumpa, bumpa, bumpa, bumpa” with drums, trumpets, cymbals and an inebriated, off-key singer belted out a “corrido” (country ballad).  Being on a hill, the sound traveled like a laser beam straight into our room. To add to the cacophony, the town’s church bells rang like clockwork every hour on the hour. This delirium went on all night long. 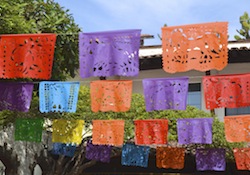 In the morning, we cleared up many mysteries.  As it turns out, we had arrived smack in the middle of the pueblo’s annual “fiestas” honoring their patron saint.  There would be festivities, music, explosives, fireworks, and church bells from sundown to sunup 14 days straight!  The real reason the villa had no other guests wasn’t just the drug wars, it was the “fiestas!” Half the American locals in Ajijic had already escaped to Puerto Vallarta till after Christmas.

So, we had arrived in paradise, but sleep would elude us. Mexico wasn’t just a land of contrasts– it’s also surreal. 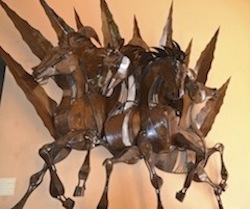 We decided to hang in there for two more nights to enjoy the spectacular Villa, and explore the local art scene. The bronze sculptures were especially striking. Many artists were out of town, so unfortunately, we caught little of the painters’ work.  The weather was gorgeous, though, and just walking around– in flat shoes!– was relaxing  Over lunch, we also struck up casual conversations with some of the other European and Canadian tourists who were visiting to escape their winters back home. Most were staying near the center of town where the fiesta reverie, though physically closer, was not as intrusive as at our hilltop hideaway.

Lake Chapala’s town center was only 20 minutes away, so we dropped in to visit the “tianguis” or street fair where families swarmed and booths sold embroidered clothes and tasty delicacies. Spectacular pottery spilled out of one street shot and Chapala’s cathedral 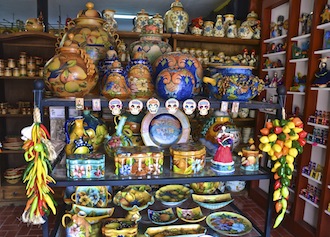 was also especially striking with its white and gold interior.

Feeling that we had seen the sights and craving a good night’s sleep, we decided to cut our Ajijic trip short by one night.  The hardest part was leaving the villa but, we said our farewells and headed off  to Tlaquepaque, a suburb of Guadalajara, Mexico’s second largest city, famous for its colonial beauty. 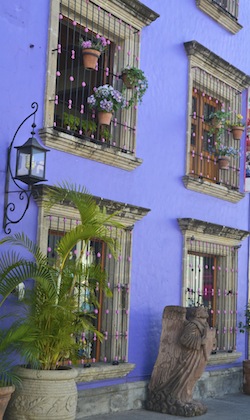 Here, we stayed at a charming inn called “Quinta San Jose” just a block away from the cultural center that brims with fine art, sculpture, crafts, leather goods, embroidered linens, and restaurants.

Sadly, we found prices high and bargaining a thing of the past. However, the colors, sights, mixture of old and new world charm made our two days there memorable.  It’s hard not to love Mexico, even with all its issues.

Sad to say, a good night’s sleep eluded us in Tlaquepaque, too.  Our room was right off the pool and a spirited happy hour dragged on into  the wee hours of the morning. Viva Mexico! 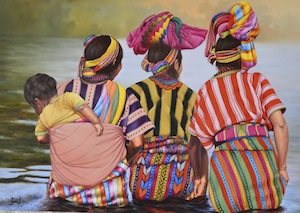 Despite the hurdles, we did return home strangely refreshed from the beauty, hospitality and kindness we experienced everywhere.

And, as I write, I’m reliving it all again with a white, purring cat on my lap, a smile on my face, and knowing a deep and peaceful sleep awaits me tonight in my own comfortable bed.